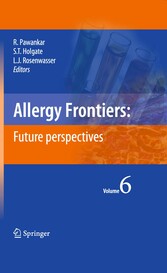 When I entered the field of allergy in the early 1970s, the standard textbook was a few hundred pages, and the specialty was so compact that texts were often authored entirely by a single individual and were never larger than one volume. Compare this with Allergy Frontiers: Epigenetics, Allergens, and Risk Factors, the present s- volume text with well over 150 contributors from throughout the world. This book captures the explosive growth of our specialty since the single-author textbooks referred to above. The unprecedented format of this work lies in its meticulous attention to detail yet comprehensive scope. For example, great detail is seen in manuscripts dealing with topics such as 'Exosomes, naturally occurring minimal antigen presenting units' and 'Neuropeptide S receptor 1 (NPSR1), an asthma susceptibility gene.' The scope is exemplified by the unique approach to disease entities normally dealt with in a single chapter in most texts. For example, anaphylaxis, a topic usually confined to one chapter in most textbooks, is given five chapters in Allergy Frontiers. This approach allows the text to employ multiple contributors for a single topic, giving the reader the advantage of being introduced to more than one vi- point regarding a single disease.