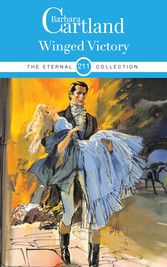 While her beloved parents were alive, the beautiful young Cledra Melford had basked in the radiance of their love, barely noticing that they were poor and had to scrape by. To make ends meet.

But, since they were tragically killed in an accident and she came to live with her hateful and bitter uncle, Sir Walter Melford, she has been cruelly abused and ill-treated.

His violent beatings the lovely Cledra can almost bear, but when he decides to sell her adored horse, Star, to a man known for his cruelty, it is the last straw for her.

So Cledra appears at the door of the dashing Earl of Poynton, who is famed among thesporting fraternity for his pedigree stable and in the Social world for his many affaires de Coeur with fashionable ladies.

Cledra begs him to secretly buy Star from her to ensure that her stallion will be safe and well cared for and he insists on renaming him 'Winged Victory' and then the Earl agrees.

Soon, when Sir Walter attempts to wreak violent revenge on his niece, the horrified Earl rescues her and whisks her away to his grandmother's house with death hard on their heels

And love not far behind.