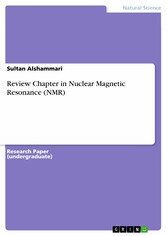 Research Paper (undergraduate) from the year 2018 in the subject Chemistry - Other, grade: A, , language: English, abstract: Nuclear magnetic resonance (NMR) is a physical phenomenon that depends on the quantitative mechanical magnetic properties of the nucleus of the atom. NMR is used to denote a set of scientific methodologies and techniques. This phenomenon is used to study molecules in terms of structure and spatial composition. The phenomenon is mainly based on the fact that all atomic nuclei that have an odd number of protons or neutrons have intrinsic magnetic torque and angular momentum. The nuclei used in these techniques are the nucleus of the hydrogen atom H1, the most abundant isotope of hydrogen, Carbon-13. Other isotopes can be used but their uses are less. The spinning motion of these elements revolves around a magnetic moment (M) axis. When these nuclei are placed between poles of an external magnetic field, they influence the energy levels of the spin energy level of these nuclei, resulting in dissociation of energy splitting The spherical motion to two different energy levels is based on the direction of the magnetic momentum resulting from the spindle motion