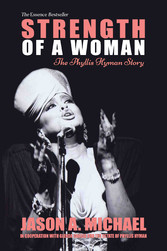 Strength of a Woman - The Phyllis Hyman Story

Strength of a Woman - The Phyllis Hyman Story

The story of singer Phyllis Hyman is brought to light in the powerful new biography Strength Of A Woman: The Phyllis Hyman Story by Jason A. Michael. Hyman's 20-year career, which included the release of eight albums as well as a Tony nomination and Theater World Award for her Broadway turn in Sophisticated Ladies, was brought to a tragic end by her suicide June 30, 1995, just hours before she was due to take the stage at the legendary Apollo Theatre. In the spotlight, Hyman's breathtaking voice and stunning beauty shone brightly. But off stage, after the applause and the laughter produced by her bawdy humor had faded, Hyman spent her days and nights engaged in an exhausting battle against bipolar disorder. Complicating its crippling effects was Hyman's addiction to drugs and alcohol, which she tried repeatedly to kick, and the demands and constraints of being a female African-American entrepreneur in an industry controlled by white men. But though she ultimately chose to extricate herself from the pain, she did so not before leaving a legacy of beautiful music that will last and live on forever as a true testament to the 'strength of a woman.'