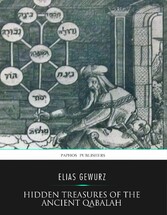 Hidden Treasures of the Ancient Qabalah

Hidden Treasures of the Ancient Qabalah

Paphos Publishers offers a wide catalog of rare classic titles, published for a new generation.
The Qabalah is the Secret Doctrine of the Jews, handed down throughout the ages by the great teachers to their beloved disciples under the solemn vow of secrecy.
In the Twelfth Century, however, the principal text-book of the Qabalah was written down by a very learned Rabbi named Moses de Leon. This book is known as the Zohar, and contains inexhaustible mines of occult knowledge. Priceless treasures of mystic lore are scattered in its volumes, awaiting discovery by the intelligent student. The language of the Zohar, however (the Hebrew Chaldaic), known to a very few scholars only, constitutes the main difficulty in the way of those desirous of studying the Qabalah.