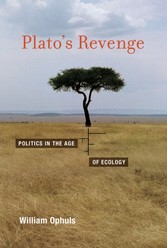 Plato's Revenge - Politics in the Age of Ecology

Plato's Revenge - Politics in the Age of Ecology

In this provocative call for a new ecological politics, William Ophuls starts from a radical premise: 'sustainability' is impossible. We are on an industrial Titanic, fueled by rapidly depleting stocks of fossil hydrocarbons. Making the deck chairs from recyclable materials and feeding the boilers with biofuels is futile. In the end, the ship is doomed by the laws of thermodynamics and by the implacable biological and geological limits that are already beginning to pinch. Ophuls warns us that we are headed for a postindustrial future that, however technologically sophisticated, will resemble the preindustrial past in many important respects. With Plato's Revenge, Ophuls, author of Ecology and the Politics of Scarcity, envisions political and social transformations that will lead to a new natural-law politics based on the realities of ecology, physics, and psychology.In a discussion that ranges widely -- from ecology to quantum physics to Jungian psychology to Eastern religion to Western political philosophy -- Ophuls argues for an essentially Platonic politics of consciousness dedicated to inner cultivation rather than outward expansion and the pursuit of perpetual growth. We would then achieve a way of life that is materially and institutionally simple but culturally and spiritually rich, one in which humanity flourishes in harmony with nature.