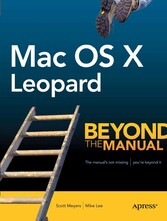 Mac OS X Leopard: Beyond the Manual is written for the sophisticated computer user who would find an introductory manual tedious. Features new to Leopard are emphasized, as are complex features that, though available in earlier versions of OS X, were not readily accessible. The narrative is fast-paced, concise, and respectful of the reader's familiarity with earlier versions of the program.


Mike Lee, the world's toughest programmer, is the founder and chief executive officer of United Lemur, a philanthropic revolution disguised as a software company. Mike has had a role in creating many popular iPhone applications, including Obama '08, Tap Tap Revenge, Twinkle, and Jott. Prior to iPhone, Mike cut his teeth and won an Apple Design Award at Seattle-based Delicious Monster Software. Mike is a popular blogger and occasional pundit, and has been seen on Twitter as @bmf. Mike and his wife are originally from Honolulu, but live in Silicon Valley, where they are raising two cats. Mike's hobbies include weightlifting, single malts, and fire. Mike can be contacted at mike@unitedlemur.org.