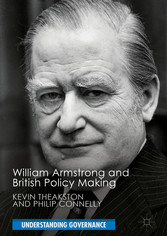 This book offers a detailed account of the life and career of William Armstrong, the most influential civil servant in Britain in the 1960s and 1970s, and one of the most powerful and significant Whitehall officials in the post-1945 period. He was at the centre of the British government policy-making machine for over 30 years - the very incarnation of the 'permanent government' of the country. He was the indispensable figure at the right hand of successive Chancellors of the Exchequer, and a reforming Head of the Civil Service.  His role and power was such that he was controversially dubbed 'deputy prime minister' under Edward Heath. The book also casts light on wider institutional, political and historical issues around the working and reform of the civil service and the government machine, the policy-making process, and the experience in office of Labour and Conservative governments from the 1940s to the 1970s.                    ;;;;;;;;;;;

Kevin Theakston is Professor of British Government at the University of Leeds, UK, and a Fellow of the Royal Historical Society. He has published 12 previous books, including The Labour Party and Whitehall (1992), The Civil Service Since 1945 (1995), Leadership in Whitehall (1999), and After Number 10: Former Prime Ministers in British Politics (2010).
Philip Connelly spent 18 years with BP, where he held senior appointments in government relations, policy planning and corporate affairs. He was also a Deputy Director of the CBI and UK Director of the British-North American Committee. He published two previous books, The Politics of Scarcity: Resource Conflicts in International Relations (co-author, 1975) and Dealing with Whitehall (1992).