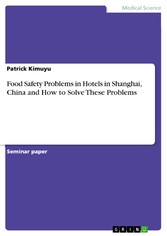 Food Safety Problems in Hotels in Shanghai, China and How to Solve These Problems

Food Safety Problems in Hotels in Shanghai, China and How to Solve These Problems


Seminar paper from the year 2016 in the subject Medicine - Public Health, grade: 1, Egerton University, language: English, abstract: In the recent years, food safety in Shanghai, China has become an enormous public health problem. Hotels in Eastern China have increasingly been associated with food safety issues such as food poisoning, contamination and unhealthy food ingredients which have cost the region its popularity in the hospitality industry. Shanghai is situated strategically on the Eastern region of China; thus, making it a preferred destination for international tourists. In addition, the city hosts a large number of industries. As such, it has a considerably a large population compared to other cities in the region. It is also known for its heterogeneous population comprising of tourists and foreign workers, as well as, entrepreneurs from foreign countries. It is believed that its strategic location has enabled it to achieve a competitive advantage in the production and hospitality industries because it serves as a gateway into the other East Asian countries and the Pacific region (Lau et al., 2013). It is believed that the enormous population in Shanghai has always been the anchor of the hospitality industry in which hotels and restaurants experience an immense demand of food reserves from the population. This is probably the reason as to why multinational investors have established hotels and restaurants in the region to harness the benefits of the large client base, primarily in Shanghai city. However, food safety problems seem to have exerted an undesirable impact on the progress of the hospitality industry. For instance, the increasing cases of food poisoning and industrial pollution of the environment have caused unprecedented outcry from the tourists and investors in the hotel industry. Therefore, this research paper will discuss food safety problems in Shanghai. It will also discuss several solutions to the food safety problems which have impacted negatively on the hotel industry in Shanghai and its environs, owing to the dangers of unhealthy foods.