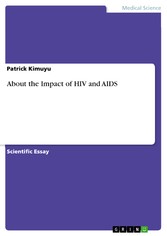 About the Impact of HIV and AIDS

About the Impact of HIV and AIDS


Scientific Essay from the year 2017 in the subject Medicine - Epidemiology, grade: 1, , language: English, abstract: HIV/AIDS seems to have created an unprecedented burden of disease to the public healthcare systems around the globe and, the future demographic impact of the disease is relatively unpredictable (United Nations 1). Currently, HIV/AIDS prevalence and incidence rates seem to have assumed upward trends. As a result, health status of the global population, which is living with HIV and AIDS, has emerged to be one of the health risk concerns among international health agencies and Independent Governments. Moreover, the ever increasing mortality rates among the affected population pose a significant demographic impact. United Nations states, 'HIV/AIDS will have long-term effects on families, communities, enterprises, agriculture and the well-being and economic future of society as a whole' (1). It is evident that HIV/AIDS epidemic has caused devastated consequences since 1981, when the disease was first diagnosed. For instance, AIDS-related deaths accounted for 22 million lives by 2002 and 42 million people among the global population were living with HIV/AIDS. Recently, in 2009, the population people living with HI/AIDS had increased to 33.3 million and, this number was found to have risen to 34 million by the end of 2010 (Avert par. 1). Further epidemiological reports indicate that over 57 million people had been infected with HIV by 2001, barely two decades since the pandemic was reported, in 1981 and, most of the people were found to have been infected through sexual, parenteral and mother-to-child transmission modes (Marison 8). Therefore, this research will give an overview of the global HIV/AIDS prevalence and incidence trends. It will also discuss the epidemiological impacts of the pandemic, especially with regard to economic growth the burden of disease to the health sector.