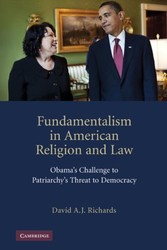 Why, from Reagan to George Bush, have fundamentalists in religion and in law (originalists) exercised such political power and influence in the United States? Why has the Republican Party forged an ideology of judicial appointments (originalism) hostile to abortion and gay rights? Why and how did Barack Obama distinguish himself among Democratic candidates not only by his opposition to the Iraq war but by his opposition to originalism? This book argues that fundamentalism in both religion and law threatens democratic values and draws its appeal from a patriarchal psychology still alive in our personal and political lives and at threat from the constitutional developments since the 1960s. The argument analyzes this psychology (based on traumatic loss in intimate life) and resistance to it (based on the love of equals). Obama's resistance to originalism arises from his developmental history as a democratic, as opposed to patriarchal, man who resists the patriarchal demands on men and women that originalism enforces - in particular, the patriarchal love laws that tell people who and how and how much they may love.