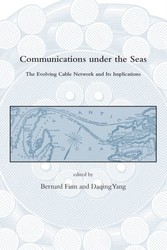 Communications Under the Seas - The Evolving Cable Network and Its Implications

Communications Under the Seas - The Evolving Cable Network and Its Implications

By the end of the twentieth century, fiber-optic technology had made possible a worldwide communications system of breathtaking speed and capacity. This amazing network is the latest evolution of communications technologies that began with undersea telegraph cables in the 1850s and continued with coaxial telephone cables a hundred years later. Communications under the Seas traces the development of these technologies and assesses their social, economic, and political effects. If we cannot predict the ultimate consequences of today's wired world -- its impact on economic markets, free expression, and war and peace -- or the outcome of the conflict between wired and wireless technology, we can examine how similar issues have been dealt with in the past. The expert contributors to this volume do just that, discussing technical developments in undersea cables (and the development of competing radio and satellite communications technology), management of the cables by private and public interests, and the impact on military and political activities. Chapters cover such topics as the daring group of nineteenth-century entrepreneurs who wove a network of copper wires around the world (and then turned conservative with success), the opening of the telegraphic network to general public use, the government- and industry-forced merger of wireless and cable companies in Britain, and the impact of the cable network on diplomacy during the two world wars.