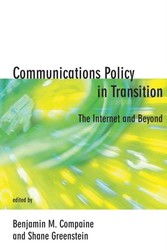 Until the 1980s, it was presumed that technical change in most communications services could easily be monitored from centralized state and federal agencies. This presumption was long outdated prior to the commercialization of the Internet. With the Internet, the long-forecast convergence of voice, video, and text bits became a reality. Legislation, capped by the Telecommunications Act of 1996, created new quasi-standards such as &quote,fair&quote, and &quote,reasonable&quote, for the FCC and courts to apply, leading to nonstop litigation and occasional gridlock.This book addresses some of the many telecommunications areas on which public policy makers, corporate strategists, and social activists must reach agreement. Topics include the regulation of access, Internet architecture in a commercial era, communications infrastructure development, the Digital Divide, and information policy issues such as intellectual property and the retransmission of TV programming via the Internet.