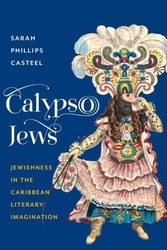 With what may seem surprising frequency, Caribbean writers have turned to Jewish Caribbean experiences of exodus and reinvention, from the arrival of Sephardic Jews expelled from Spain and Portugal in the 1490s to the flight of European Jewish refugees to Trinidad and elsewhere in the 1930s. Examining this historical migration through the lens of postwar Caribbean fiction and poetry, Sarah Phillips Casteel conducts the first major study of representations of Jewishness in Caribbean literature. Bridging the gap between postcolonial and Jewish studies, Calypso Jews enriches crosscultural investigations of Caribbean creolization. Caribbean writers invoke both the 1492 expulsion and the Holocaust as part of their literary archaeology of slavery and its legacies. Despite the unequal and sometimes fraught relations between Blacks and Jews in the Caribbean before and after emancipation, Black-Jewish literary encounters reflect sympathy and identification more than antagonism and competition. Proposing an alternative to U.S.-based critical narratives of Black-Jewish relations, Casteel reads Derek Walcott, Maryse Cond, Michelle Cliff, Jamaica Kincaid, Caryl Phillips, David Dabydeen, and Paul Gilroy, among others, to reveal a distinctive inter-diasporic relationship refracted through the creative innovations of two resilient cultures.