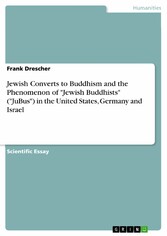 Jewish Converts to Buddhism and the Phenomenon of 'Jewish Buddhists' ('JuBus') in the United States, Germany and Israel

Jewish Converts to Buddhism and the Phenomenon of 'Jewish Buddhists' ('JuBus') in the United States, Germany and Israel


Scientific Essay from the year 2012 in the subject Jewish Studies, grade: Not graded, , course: Treten Sie ein! Treten Sie aus! Warum Menschen ihre Religion wechseln, language: English, abstract: The aim of this article is to shed some light, as far as it is possible at the present time, on the part played by Jews in the spread of Buddhism since its arrival in the west as a religious practice. We shall also take a look at the 'special case' of Jewish Buddhists (JuBu) among Jewish converts and suggest a tentative definition. It is more than 120 years now since Buddhism began to get a foothold in western countries and began, slowly and steadily, to become at home here. The first historically-attested convert on the soil of the USA was Charles T. Strauss who, at the 1893 'World Parliament of Religions' in Chicago, declared his conversion to Buddhism and took his Buddhist vow in a small, solemn ceremony in the present of an Asian master. Strauss came from New York and was the son of Jewish parents. After this key event, Buddha-Dharma, the 'doctrine of the Enlightened One' seems to have exercised a remarkable power of attraction for many Jews. Thus Buddhism owes its transformation and growth in the west to many intermediaries with a Jewish background: Philipp Kapleau, Bernard Glassman, Nyanaponika Mahathera, Ayya Khema, Jack Kornfield, Joseph Goldstein, Sharon Salzberg, Sylvia Boorstein, Rabbi Alan Lew, Nathan Katz, Lama Surya Das, Thubten Chödron, to name but a few. A glance at the Buddhist centres of the great east and west coast cities of the USA shows that up to 30% of their members are of Jewish descent. The renowned Buddhist master Chogyam Trungpa, from Tibet, once joked that there were so many Jews among his disciples that he would be able to found a special Buddhist school for them, the 'Oy Vey School of Buddhism'. In these centres, some of the members assert that they are 'passionate Buddhists' and 'faithful Jews' at one and the same time. This phenomenon of 'Jewish Buddhists' has become so widespread and striking since the boom of eastern wisdom teachings in the 1960s and 1970s that a specific term has established itself in the USA (not without resistance), namely, 'JuBus' or 'JewBus' as an abbreviation for 'Jewish Buddhists'.