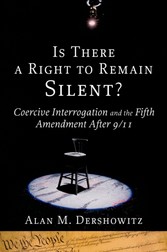 Is There a Right to Remain Silent?: Coercive Interrogation and the Fifth Amendment After 9/11

Is There a Right to Remain Silent?: Coercive Interrogation and the Fifth Amendment After 9/11

The right to remain silent, guaranteed by the famed Fifth Amendment case, Miranda v. Arizona, is perhaps one of the most easily recognized and oft-quoted constitutional rights in American culture. Yet despite its ubiquity, there is widespread misunderstanding about the right and the protections promised under the Fifth Amendment. In Is There a Right to Remain Silent? renowned legal scholar and bestselling author Alan Dershowitz reveals precisely why our Fifth Amendment rights matter and how they are being reshaped, limited, and in some cases revoked in the wake of 9/11. As security concerns have heightened, law enforcement has increasingly turned its attention from punishing to preventing crime. Dershowitz argues that recent Supreme Court decisions have opened the door to coercive interrogations--even when they amount to torture--if they are undertaken to prevent a crime, especially a terrorist attack, and so long as the fruits of such interrogations are not introduced into evidence at the criminal trial of the coerced person. In effect, the court has given a green light to all preventive interrogation methods. By deftly tracing the evolution of the Fifth Amendment from its inception in the Bill of Rights to the present day, where national security is the nations first priority, Dershowitz puts forward a bold reinterpretation of the Fifth Amendment for the post-9/11 world. As the world we live in changes from a deterrent state to the heightened vigilance of todays preventative state, our construction, he argues, must also change. We must develop a jurisprudence that will contain both substantive and procedural rules for all actions taken by government officials in order to prevent harmful conduct-including terrorism. Timely, provocative, and incisively written, Is There a Right to Remain Silent? presents an absorbing look at one of our most essential constitutional rights at one of the most critical moments in recent American history.