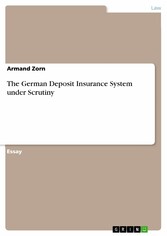 
Essay from the year 2015 in the subject Law - Civil / Private / Trade / Anti Trust Law / Business Law, grade: A-, Johns Hopkins University (SAIS), course: European Financial Markets, language: English, abstract: The financial crisis has highlighted the importance of deposit protection and has brought this neglected topic to the core of the debate on financial stability (Zimmermann, 2013). Germany was hit harder than most experts and politicians expected. The federal government was forced to take unprecedented steps, including the nationalization of banks and providing an unlimited guarantee on savings deposits. These actions illustrated the necessity to reform the German deposit system, opening a controversial debate on both, the national and European level. Deposit protection schemes serve two main functions. First, they provide security to depositors and should help to prevent bank runs. Second, they should facilitate bank resolution, shielding depositors from losses. Together with financial regulation and supervision and lenders of last resort, deposit protection represents a key component of financial safety nets, which aim at reducing the occurrence of financial crises and limiting their effects if they do occur. Accordingly, deposit insurance schemes play an important role for individual market participants as well as for the entire economy. This paper examines the German deposit insurance system before, during, and after the financial crisis. It answers three main questions: First, what was the state of the deposit insurance system before the financial crisis? Second, how did the deposit schemes fared during the crisis? Third, what reforms have been introduced and what is the current state of the system?