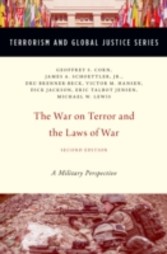 Many years after the United States initiated a military response to the terrorist attacks of September 11th, 2001, the nation continues to prosecute what it considers an armed conflict against transnational terrorist groups. Understanding how the law of armed conflict applies to and regulates military operations executed within the scope of this armed conflict against transnational non-state terrorist groups is as important today as it was in September 2001. In The War on Terror and the Laws of War seven legal scholars, each with experience as military officers, focus on how to strike an effective balance between the necessity of using armed violence to subdue a threat to the nation with the humanitarian interest of mitigating the suffering inevitably associated with that use. Each chapter addresses a specific operational issue, including the national right of self-defense, military targeting and the use of drones, detention, interrogation, trial by military commission of captured terrorist operatives, and the impact of battlefield perspectives on counter-terror military operations, while illustrating how the law of armed conflict influences resolution of that issue. This Second Edition carries on the critical mission of continuing the ongoing dialogue about the law from an unabashedly military perspective, bringing practical wisdom to the contentious topic of applying international law to the battlefield.