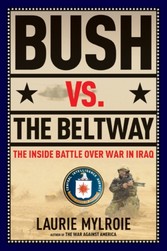 Bush vs. the Beltway - The Inside Battle over War in Iraq

Bush vs. the Beltway - The Inside Battle over War in Iraq

As the postwar debate continues, a leading expert reveals the obstacles that stood between the United States and the fall of Saddam Hussein -- many of them within the U.S. government itself Laurie Mylroie's previous books, the number one New York Times bestseller Saddam Hussein and the Crisis in the Gulf (coauthored with Judith Miller) and The War Against America, were influential in building the case against Iraq. Now Mylroie reveals the story behind the buildup to Operation Iraqi Freedom -- a story known to few outside of Washington.Combining important new research with an insider's grasp of Beltway politics, Mylroie describes how the CIA and the State Department have systematically discredited critical intelligence about Saddam's regime, including indisputable evidence of its possession of weapons of mass destruction. She reveals how major elements of the case against Iraq -- including information about possible links to al Qaeda and evidence of potential Iraqi involvement in the fall 2001 anthrax attacks -- were prematurely dismissed by these agencies for cynical reasons. Mylroie traces how the very idea of state-sponsored terrorism was pronounced dead after the 1993 World Trade Center bombing, giving states like Iraq an open ing to underwrite terrorism without being detected. And she demonstrates that the war with Iraq was not only justifiable -- but the necessary and moral course of action.Bush vs. the Beltway also includes an authoritative essay by Professor Robert F. Turner of the University of Virginia School of Law, who makes the case that -- based on not only standing U.N. resolutions but the totality of circumstances surrounding Saddam's regime -- the war was justified on both legal and moral grounds. As the world enters a new era in international relations, one in which the new realities of terror mingle deceptively with eternal truths about war, intelligence, tyranny, and evil, Bush vs. the Beltway offers sobering lessons in the realities of twenty-first-century conflict.