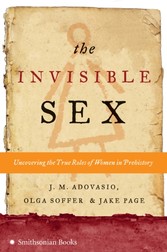 Invisible Sex - Uncovering the True Roles of Women in Prehistory

Invisible Sex - Uncovering the True Roles of Women in Prehistory

Shaped by cartoons and museum dioramas, our vision of Paleolithic times tends to feature fur-clad male hunters fearlessly attacking mammoths while timid women hover fearfully behind a boulder. In fact, recent research has shown that this vision bears little relation to reality.The field of archaeology has changed dramatically in the past two decades, as women have challenged their male colleagues' exclusive focus on hard artifacts such as spear points rather than tougher to find evidence of women's work. J. M. Adovasio and Olga Soffer are two of the world's leading experts on perishable artifacts such as basketry, cordage, and weaving. In The Invisible Sex, the authors present an exciting new look at prehistory, arguing that women invented all kinds of critical materials, including the clothing necessary for life in colder climates, the ropes used to make rafts that enabled long-distance travel by water, and nets used for communal hunting. Even more important, women played a central role in the development of language and social lifein short, in our becoming human. In this eye-opening book, a new story about women in prehistory emerges with provocative implications for our assumptions about gender today.