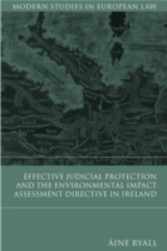 This work is concerned with enforcement of the Environmental Impact Assessment (EIA) directive in Ireland, and by extension, in the European Union more widely. As a case study it delves into the complex situation pertaining in Ireland. At a more general level it offers an up-to-date, theoretically rich and critically incisive examination of the enforcement of the EIA directive in Europe, with the main focus being on the role of the national courts in overseeing the correct application of the directive by the competent authorities via the judicial review process. The procedural requirements set down in the EIA directive are examined against the backdrop of the role played by the public in environmental decision-making. Amendments to the directive prompted by the Aarhus Convention are explained and their impact in practice is assessed. The core elements of the concept of effective judicial protection developed by the European Court of Justice are explored. Following an analysis of the EIA case law from the Irish Superior Courts to date, the work examines the extent to which Irish planning and administrative law meets the requirements of the principle of effective judicial protection and the access to justice provisions articulated in the Aarhus Convention.