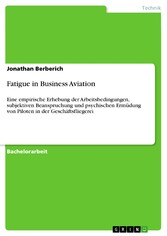 Bachelorarbeit aus dem Jahr 2012 im Fachbereich Ingenieurwissenschaften - Luft- und Raumfahrttechnik, Note: 1,0, Hochschule Bremen, Sprache: Deutsch, Abstract: The aim of this paper is to examine the role of fatigue in business aviation in Germany and its neighbours based on data collected from executive and corporate pilots. A paper-pencil questionnaire was developed, containing the parts demography, operating scheme, duty times, sleep and fatigue. Participants were also asked about their opinion on flight time limitations and were invited to comment on the study itself. In addition, an identical online-questionnaire was developed. Beginning in October 2011, the questionnaires were distributed among a number of commercial and corporate pilots. Most of them received an invitation, containing the link and the password of the online-survey. Also some paperpencil-questionnaires were given away, together with a postage paid envelope. A total of 20 pilots responded, not counting invalid and incomplete data. This can be classified as a very low response rate. Thus the application of statistical procedures were kept to a minimum. The results reveal the influence of long duty times, early reporting times, night flights and other operational factors on the sleep/wake cycle and the performance in flight. Some pilots showed a slightly larger sleep latency and a shorter sleep duration after service, whereas the overall sleep duration and quality is normal. One third of the pilots reported having dozed off unintentionally at least once, which seems to be a frequent occurrence in aviation. A large part of them also thinks that fatigue in aviation is a problem for flight safety and wants the flight and duty time limitations to be reviewed. Because the study is not representative, no definite conclusions can be drawn. However, the collected data does suggest that fatigue may be a common occurence on a substantial number of business flights. The results show that more scientific surveys, concerning this field of aviation, need to be done. Together with other studies, there is large evidence that fatigue has a strong impact on performance. In addition, it seems to be a common problem all over the world and concerning most kinds of operators.