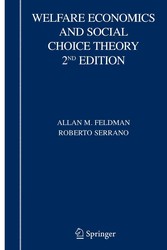 This book covers the main topics of welfare economics - general equilibrium models of exchange and production, Pareto optimality, un­ certainty, externalities and public goods - and some of the major topics of social choice theory - compensation criteria, fairness, voting. Arrow's Theorem, and the theory of implementation. The underlying question is this: 'Is a particular economic or voting mechanism good or bad for society?' Welfare economics is mainly about whether the market mechanism is good or bad; social choice is largely about whether voting mechanisms, or other more abstract mechanisms, can improve upon the results of the market. This second edition updates the material of the first, written by Allan Feldman. It incorporates new sections to existing first-edition chapters, and it includes several new ones. Chapters 4, 6, 11, 15 and 16 are new, added in this edition. The first edition of the book grew out of an undergraduate welfare economics course at Brown University. The book is intended for the undergraduate student who has some prior familiarity with microeconomics. However, the book is also useful for graduate students and professionals, economists and non-economists, who want an overview of welfare and social choice results unburdened by detail and mathematical complexity. Welfare economics and social choice both probably suffer from ex­ cessively technical treatments in professional journals and monographs.


Allan M. Feldman has taught economics at Brown University for 34 years. He has written and published articles in the areas of general equilibrium theory, fairness and equity, Arrow's theorem, strategy-proofness, majority voting theory, compensation criteria, the value of life, and law and economics. He has taught thousands of Brown undergraduates in a wide variety of courses, and has served for many years as the director of undergraduate studies in economics at Brown. He has also worked as an economics consultant in litigation.
Roberto Serrano is a Professor of Economics at Brown University, where he has worked since 1992 when he got his PhD from Harvard University. His fields of research are economic theory and game theory. He has been an Associate Editor of several journals, including Economic Theory, Mathematical Social Sciences and Research in Economics. He has published over thirty articles in refereed journals, and his research has been supported through fellowships and awards from prestigious institutions, including The Sloan Foundation, the U.S.-Israel Binational Science Foundation, the U.S. National Science Foundation and Spain's Fundacion Banco Herrero.