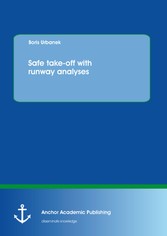 Text Sample: Chapter 1,Definition and purpose of runway analysis : One of the most essential responsibilities of an aircraft operator is to ensure a safe operation according to the authority regulations as well as manufacturer's instructions. Considering the fact that the take off and landing are the most demanding and dangerous phases of a flight, the operator is specially required to pay attention that all pre-flight calculations for these phases are fulfilled. Moreover, the output data of these calculations need to be perfectly understood by all relevant members of a flight crew, who directly conduct the flight, and a flight dispatching, who uses these data during the planning of aircraft activities. Besides other factors, the Maximum Take off Mass (MTOM) at a particular aerodrome for specific local and weather conditions is one of the most limiting figures for the aircraft take off phase. This mass must be reached at latest on the runway at the time of brake release at the start of take off. According to EU-OPS, an operator shall ensure that the take off mass does not exceed the maximum take off mass specified in the Airplane Flight Manual (AFM) for the pressure altitude and the ambient temperature at the aerodrome at which the take off is to be made (3). Consequently, the lower figure of the Maximum Structural Take off Mass (MSTOM) and a calculated maximum performance limited mass for the take off for specific aerodrome conditions is the MTOM. For a safe aircraft operation it is always necessary to consider the worst case scenario and therefore a performance limited mass for the take off must also include a possibility of critical engine failure at the decision speed v1. For that reason, in addition to the MTOM, the appropriate take off speeds including the decision speed need to be determined. To determine a performance limited mass most of the operators used to use so called aerodrome tables or tables at manuals provided by the aircraft manufacturer (QRH - Quick Reference Handbook). These data though tend to be very conservative and therefore there is a tendency of the aircraft operators to determine a performance limited take off mass by using software for so called Runway Analyses (4). The aircraft performance data calculation reflects through the whole airline operation and that is why the airlines nowadays either subcontract or use their own tailored software to optimize the necessary take off performance calculation. Similar to the MTOM it is necessary to determine the Maximum Landing Mass (MLM) too. An operator shall ensure that the landing mass of the airplane does not exceed the maximum landing mass specified for the altitude and the ambient temperature expected for the estimated time of landing at the destination and alternate aerodrome (3). This mass is the lower figure of a Maximum Structural Landing Mass (MSLM) stated by the manufacturer and a maximum performance limited landing mass calculated for specific conditions at the destination aerodrome according to the AFM. For a determination of the performance limited landing mass the aerodrome tables, the QRH tables or specialized software for runway analysis are used as well (4). As a conclusion of above mentioned statements it could be defined that the Runway Analysis facilitates the determination of the maximum allowable take off and landing masses with associated speeds, based on critical engine failure, for specific airport/runway conditions and various airplane configurations. The limitations observed are those specified in the Civil Aviation Authority approved AFM for the airplane (5). 2, Factors affecting MTOM and v-speeds: The following chapter describes all factors which could affect the determination of the MTOM and associated v speeds. A strong relationship between them supposes that there cannot be made a sharp line between those factors affecting the MTOM and those affecting the v-speeds. These figures go hand in hand and determination of a proper value of the MTOM for specific conditions without calculation of the associated v speeds, and vice-versa, is impossible for a safe operation of the aircraft. For the purpose of this book v-speeds are defined as speeds associated with a take off phase of a flight. Regarding operational aspect mainly following speeds belong to this group; however there exist many others as well: - v1; take off decision speed - maximum calibrated airspeed established by the operator at which the crew can at latest decide to reject the take off and it is ensured to stop the aircraft within the limits of the runway - vr; rotation speed - calibrated airspeed at which the pilot initiates the rotation during the take off to reach v2 at 35 ft height above the runway surface - v2; take off safety speed - minimum climb speed in terms of calibrated airspeed that must be reached at a height of 35 ft above the runway surface in case of engine failure 2.1, MSTOM: A Maximum Structural Take off Mass is a maximum permissible total aircraft mass at the start of the take off run specified in the AFM or operations manual (OM), if more restrictive. This mass is determined in accordance with a flight structure resistance criteria and a resistance of landing gear. An aircraft operator must ensure that the take off mass (TOM) at the brake release never exceeds the MSTOM as it could result in a damage of the aircraft structure. However it could be equal or lower than the Maximum Ramp Mass (MRM), to allow for a fuel used in start-up and taxi.