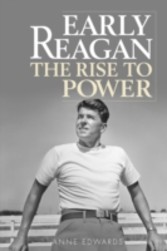 Early Reagan - The Rise to Power

Early Reagan - The Rise to Power

First published in 1986 and nominated for the Pulitzer Prize, Early Reagan is still the most in-depth portrayal of the pre-government years of the late president. The book uncovers Reagan's formative years: childhood poverty, film stardom, and his politicization via the Screen Actors Guild. Anne Edwards interviewed more than two hundred people important in the life of Reagan as well as those of his two wives, Jane Wyman and Nancy Davis. The book concludes with Reagan's entry into politics in 1966, when he announced his candidacy for Governor of California in the living room of his hilltop San Onofre home. As the late historian Barbara Tuchman noted, ',For anyone who wants to know about the circumstances . . . that formed Ronald Reagan into a political figure, this is the book to read.'