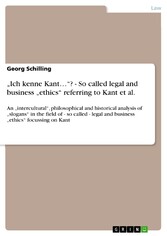 Document from the year 2009 in the subject Law - Philosophy, History and Sociology of Law, University of Vienna (Institut für Rechtsphilosophie, Religions- und Kulturrecht ), course: Against 'white'-washing shadows of philosophers in ethics lectures/courses, language: English, abstract: Those interested in an interesting and (!) scientific text about Immanuel KANT, and texts rarely ever mentioned, and: if mentioned then mostly often in a quite positive way, are to be satisfied by this fact-bound and critical text. This text is also written upon the wish to introduce readers not specialised in so called KANTian 'ethics' to a (partly very shocking), 'down-to-earth' KANT insofar as KANT is shown here with texts full of prejudices, insulting statements, (mere) assumptions, many of them already often said to be unscientific even in his days - those interested in reading not another 'Kant on Management', 'Kant and human rights', 'KANTian ethics', 'KANT in {so called} legal ethics' script, or (text-)book are most probably astonished by the multitude of scientific voices in fact just 'praising', in fact often only (semi-)'beatifying' Immanuel KANT; this text provides a huge amount of discussions especially concerning the 'way', the 'mode', the 'narrative' which 'we' are (mostly) allowed (!) to 'know' what KANT (only?) stands for ('human rights; categorial imperative; deontological ethics'). Furthermore this texts wishes to raise a multitude of critical questions with respect to the way KANT wrote about women, about e.g. Afro-europeans (or e.g. Afro-americans), and it also tries to point out KANT's contemporary Prof Dr Anton Wilhelm AMO's work, his success in a climate of prejudices, or racist attacks, of exclusion. But it is not only KANT, but also HEGEL, FICHTE, HUME, ROUSSEAU, VOLTAIRE and others which are to be observed with respect to totalitarian or racist texts. Furthermore, according to the Holocaust and the NS-terror, we are also to focus on the 'way' e.g. some scientists 'present' influencial former NS-members in the field of so called legal ethics, legal philosophy, 'the' German legal science, focussing on a recent text in the FRANKFURTER ALLGEMEINE ZEITUNG, a famous periodical often said to be a 'quality newspaper'.