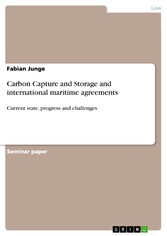 Seminar paper from the year 2011 in the subject Law - Public Law / Miscellaneous, grade: 1,3, University of Groningen, language: English, abstract: Climate change is undisputable one of the most important and most discussed topics in the 21st century so far. The Intergovernmental Panel on Climate Change observed in his 'Fourth Assessment Report on Climate Change' in 2007 that within the period of 1906 to 2005 the climate changed significantly. Global warming, increasing precipitation and a sea-level rise are just some indicators supporting the findings. One of the major causes leading to climate change is the increasing carbon dioxide concentration in the air mainly due to the use of fossil fuels. The International Energy Agency outlined that with the lack of new energy sources or at least changed energy policies, the energy-related CO2 emissions in 2050 will be twice the level of 2007. Therefore, politicians and scientists all over the world are making a huge effort to develop and provide measures for reducing the emissions of CO2 and other global warming gases. Besides the more famous accomplishments such as the subsidization of renewable energy sources or emission trading a new technology emerged in the past decade, Carbon Capture and Storage (CCS). It can be described, in general, as a technique to reduce CO2 emissions into the atmosphere by sequestrating it from fossil fuels and storing it into geological formations in the ground or in the sub-seabed. In chapter 'B' this paper will give an overview about the technological concept of CCS and the various approaches that are currently examined by scientists. CCS is seen as one of the most feasible climate change mitigation options due to its capability to reduce the emission of CO2 into the atmosphere without abandoning the use of fossil fuels. To do justice to this rating, it is necessary to support the deployment of CCS by developing and constructing legal frameworks and regulations that are flexible enough to allow for new technological advancements. The European Union is taking a big step forward with its Directive 2009/31/EC of the European Parliament and of the Council by creating a regulatory framework for the geological storage of CO2.