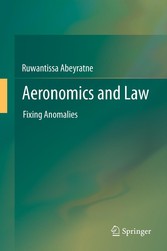 This book embarks on a contemporary analysis of the interaction of economics and law relating to air transport, delving into the major issues that plague the industry. It shows how some of the thorny and frustrating issues could be approached sensibly. Among the issues discussed are the anomaly of exponential growth of air transport which makes airline profitability continue to be poor; the legislative impediments in most countries that preclude direct foreign investment in the industry; the confounding and muddled mess behind the economics of aircraft engine emissions; and the inexplicable reality that, although civil aviation is primarily meant to meet the needs of the people of the world, State regulators have upended the equation and given priority to national interests over the interests of the passenger. The book will be of interest to economists and lawyers alike who deal with air transport issues, and also to academics and students in the area of transportation as well as regulators and airlines.

Dr. Ruwantissa Abeyratne has worked in the field of aviation law and management for over twenty five years and is currently Co-Ordinator, Regional Affairs at the International Civil Aviation Organization. He holds the degree of doctor of civil laws (DCL) from McGill University, the degree of doctor of philosophy (Ph.D) from the University of Colombo, the degree of master of laws (LL.M) from Monash University, Victoria, Australia, and the degree of bachelor of laws (LL.B) from the University of Colombo. He has published 20 books and over 300 leading journal articles on international law and air law, in addition to many papers presented to conferences. Some of his latest books are Aviation in Crisis, Aviation and the Environment, Aeropolitics, Aviation and Diplomacy, Aviation Security Law, Airport Business Law and Aviation and the Carbon Trade. Dr. Abeyratne is a Fellow of both the Royal Aeronautical Society and the Chartered Institute of Logistics and Transport. He is also a member of the British Association of Aviation Consultants and the International Law Association, in which he serves as member of both the Association's International Trade Law Committee and Space Law Committee. He is a founder member of the Montreal Branch of the Royal Aeronautical Society and Chairman of the Air Law Group of the Branch.