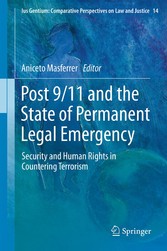 The terrorist attacks occurred in the United States on 11 September 2001 have profoundly altered and reshaped the priorities of criminal justice systems around the world. Atrocities like the 9/11 attacks, the Madrid train bombings of March 2003, and the terrorist act to the United Kingdom of July 2005 threatened the life of democratic nations. The volume explores the response of democratic nation-states to the problems of terrorism and counter-terrorism within the framework of the Rule of Law. One of the primary subjects of study is the ways in which the interests of the state (security from external threats, the maintenance of civil peace, and the promotion of the commonwealth) are balanced or not with the liberty and freedom of the citizens of the state. The distinctive aspect of this focus is that it brings a historical, political, philosophical and comparative approach to the contemporary shape and purposes of the criminal justice systems around the world.