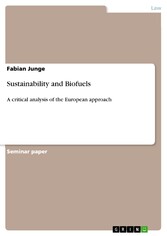 Sustainability and Biofuels - A critical analysis of the European approach

Sustainability and Biofuels - A critical analysis of the European approach

Seminar paper from the year 2012 in the subject Law - Public Law / Miscellaneous, grade: 1,3, University of Groningen, language: English, abstract: Climate change and climate protection can be considered as the most controversial and most discussed topics in the 21st century. Especially, since the Intergovernmental Panel on Climate Change released its 4th Assessment Report on Climate Change in 2007 stating that climate change is indeed mainly caused by human activities. Hence, policy-makers all over the world are taking responsibility for climate protection in order to compensate for society's faults. 1 The European Union sees itself as one of the driving forces behind fighting climate change and is keen to create and encourage policies or developments that might support their efforts. As proposed in the Lisbon and Gothenburg in 2000 and 2001, the European Union wants to be the most competitive and dynamic knowledge-based economy with a sustainable growth, more social cohesion as well as respect for the environment. One of the opportunities to achieve this objective is bioenergy, or in particular biofuels, which may allow for the reduction of greenhouse gas emissions, more energy security as well as the promotion of sustainable development globally and the creation of new markets. Biofuels can be defined as solid, liquid or gas fuel consisting of, or derived from biomass, which is composed of living and recently dead biological material. The best-known products are bioethanol and biodiesel, which are first generation biofuels derived from renewable resources, in particular food crops. Second generation biofuels, e.g. lignocellulosic biomass, vary in the fact that they are manufactured from non-food crops. To use this opportunity, the European Union crowned its preceding efforts with respect to renewable energy sources like biofuels with the release of the ambitious climate and energy policy package in January 2008. It contained various proposals for Directives including binding targets for greenhouse gas reductions, energy savings and the share of renewable energy in the total energy consumption. As a result of the long-term policy support covered by the European Union, the biofuels production has increased rigorously.