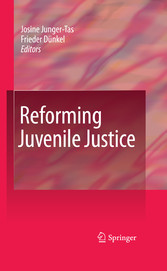 
Josine Junger-Tas studied Sociology at the Free University of Brussels (Belgium). In 1972 she obtained her Ph.D. degree in the Netherlands at the University of Groningen with a study on 'Characteristics and Social Integration of Juvenile Delinquents,' which was the start of her involvement in criminology. She worked in a research centre in Brussels in the field of juvenile crime, but returned to her home country in 1975 where she was employed by the Dutch Ministry of Justice in its Research Institute. In 1979 she was appointed as special Adviser and Director of the Research Unit on Juvenile Crime. In 1989 she was appointed as Director of the Institute. Josine Junger-Tas was active in the Council of Europe. From 1984 to1989 she chaired an Expert Committee on Juvenile Delinquency which produced two reports with recommendations for member states, the first report treating 'Social reactions to juvenile crime' and the second 'Reactions to delinquent behaviour of young people belonging to an ethnic minority.' She wrote several basic documents for the Council of Europe and in 1992 was appointed member of its Scientific Council. She was also active in the United Nations, where she also did preparatory work for the UN Criminology congresses, and served as an expert on juvenile delinquency for Central European and Middle Eastern states. In 1989 she received the Sellin-Glueck Award from the American Society of Criminology for her 'Contributions to Criminology.' She wrote a great number of articles and books, as well as reports for the Minister of Justice. In 1994 she was appointed professor of Youth Criminology at the University of Lausanne in Switzerland. She taught self-report methodology at the University of Cambridge for 3 years and since 2002 she is a visiting professor at the University of Utrecht. She is a member of the Council for the Administration of Criminal Law and the Protection of Juveniles, an independent consultant body for the Minister of Justice, which serves as an appeal court regarding decisions taken by the complaint committees of the institutions. In 2000 the University of Lausanne awarded her an honorary doctorate. In the same year, she took the initiative - with several close colleagues - to launch the European Society of Criminology. Together with Prof. Killias, she organized the first ESC conference in Lausanne and at that occasion she was elected the first ESC President. In November 2007 she received the Distinguished International Scholar Award from the American Society of Criminology.
Frieder Dünkel, born 1950 in Karlsruhe (Germany), studied law at the universities of Heidelberg and Freiburg (Germany). He received his Ph.D. in 1979, which dealt with empirical research on the effectiveness of therapeutic treatment in prisons. From 1979 until 1992 he worked as a researcher at the Max-Plank-Institute of Foreign and International Penal Law, Criminological Unit, in Freiburg (with Prof. Günther Kaiser). The subject of his 'Habilitation' in 1989 was 'Juvenile imprisonment and other forms of deprivation of liberty in an international comparison.' Since 1992 he teaches criminology, penology, juvenile justice, criminal procedure, and criminal law at the University of Greifswald in the north-east of Germany. Since 2006 he is organizing a postgraduate master program of 'Criminology and Criminal Justice (LL.M.Crim)' at the Department of Criminology at Greifswald. The research program at the Department of Criminology covers a wide range of empirical studies in juvenile criminology, penology, prisons and community sanctions, alcohol and drunk driving, human rights, etc. (see http://jura.uni-greifswald.de/duenkel). He conducted several empirical research projects funded by the Deutsche Forschungsgemeinschaft (German Research Association), Volkswagen-Foundation, Federal Ministry of Justice, Bonn, Ministry of Culture and Education, Mecklenburg Western-Pomerania, etc. Since 2004 he conducted several empirical international comparative projects on men's prisons in the states of the Baltic Sea, on women's imprisonment in Europe, on long-term imprisonment in ten European countries, and on youth violence in the states of the Baltic Sea, two of them funded by the European AGIS-scheme. He has widely published in these areas (until 1 October 2008: 28 books and 374 articles in journals and books, publications in German, English, French, Hungarian, Spanish, Catalonian, Portuguese, Polish, Russian, Czech, and Japanese language). He is the co-editor of the journal Neue Kriminalpolitik since 1989, and of the European Journal of Criminology since 2003. He has been a member of the Criminological Scientific Council of the Council of Europe 1998-2004, since 2001 as its president. Since 1994 he has coordinated several Tempus projects funded by the European Union. The subject of these projects was the reorganization of law education in Siberian law faculties (Krasnojarsk, Irkutsk, Barnaul, Omsk, Tomsk, organized together with the University of Tilburg, the Netherlands); furthermore, he coordinates Socrates exchange programs with about 35 universities in Western and Eastern Europe and teaches courses in German, English, and French as guest professor in several European universities (Nottingham, UK; Pau, Bayonne, and Agen, France; Bern, Switzerland; Krasnojarsk, Russia).