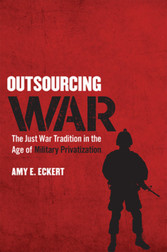 Recent decades have seen an increasing reliance on private military contractors (PMCs) to provide logistical services, training, maintenance, and combat troops. In Outsourcing War, Amy E. Eckert examines the ethical implications involved in the widespread use of PMCs, and in particular questions whether they can fit within customary ways of understanding the ethical prosecution of warfare. Her concern is with the ius in bello (right conduct in war) strand of just war theory.Just war theorizing is generally built on the assumption that states, and states alone, wield a monopoly on the legitimate use of force. Who holds responsibility for the actions of PMCs? What ethical standards might they be required to observe? How might deviations from such standards be punished? The privatization of warfare poses significant challenges because of its reliance on a statist view of the world. Eckert argues that the tradition of just war theory-which predates the international system of states-can evolve to apply to this changing world order. With an eye toward the practical problems of military command, Eckert delves into particular cases where PMCs have played an active role in armed conflict and derives from those cases the modifications necessary to apply just principles to new agents in the landscape of war.


EckertAmy E.:
Amy E. Eckert is Associate Professor of Political Science at Metropolitan State University of Denver. She is coeditor of The Future of Just War and Rethinking the 21st Century: 'New' Problems, 'Old' Solutions.