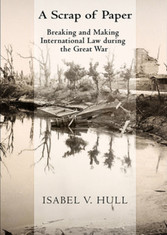 A century after the outbreak of the Great War, we have forgotten the central role that international law and the dramatically different interpretations of it played in the conflict's origins and conduct. In A Scrap of Paper, Isabel V. Hull compares wartime decision-making in Germany, Great Britain, and France, weighing the impact of legal considerations in each. Throughout, she emphasizes the profound tension between international law and military necessity in time of war, and demonstrates how differences in state structures and legal traditions shaped the way in which each of the three belligerents fought the war. Hull focuses on seven cases in which each government's response was shaped by its understanding of and respect for the law: Belgian neutrality, the land war in the west, the occupation of enemy territory, the blockade, unrestricted submarine warfare, the introduction of new weaponry (including poison gas and the zeppelin), and reprisals. Drawing on voluminous research in German, British, and French archives, the author reconstructs the debates over military decision making and clarifies the role played by law-where it constrained action, where it was manipulated to serve military need, where it was simply ignored, and how it developed in the crucible of combat. She concludes that Germany did not speak the same legal language as the two liberal democracies, with disastrous and far-reaching consequences. The first book on international law and the Great War published since 1920, A Scrap of Paper is a passionate defense of the role that the law must play to govern interstate relations in both peace and war.


HullIsabel V.:
Isabel V. Hull is John Stambaugh Professor of History at Cornell University. She is the author of Absolute Destruction and Sexuality, State and Civil Society in Germany, 1700-1815, both from Cornell.