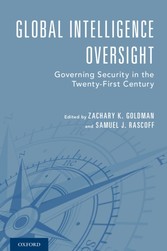 In a world that is increasingly unstable, intelligence services like the American CIA and the United Kingdom's MI6 exist to deliver security. Whether the challenge involves terrorism, cyber-security, or the renewed specter of great power conflict, intelligence agencies mitigate threats and provide decisional advantage to national leaders. But empowered intelligence services require adequate supervision and oversight, which must be about more than the narrow (if still precarious) task of ensuring the legality of covert operations and surveillance activities. Global Intelligence Oversight is a comparative investigation of how democratic countries can govern their intelligence services so that they are effective, but operate within frameworks that are acceptable to their people in an interconnected world. The book demonstrates how the institutions that oversee intelligence agencies participate in the protection of national security while safeguarding civil liberties, balancing among competing national interests, and building public trust in inherently secret activities. It does so by analyzing the role of courts and independent oversight bodies as they operate in countries with robust constitutional frameworks and powerful intelligence services. The book also illuminates a new transnational oversight dynamic that is shaping and constraining security services in new ways. It describes how global technology companies and litigation in transnational forums constitute a new form of oversight whose contours are still undefined. As rapid changes in technology bring the world closer together, these forces will complement their more traditional counterparts in ensuring that intelligence activities remain effective, legitimate, and sustainable.