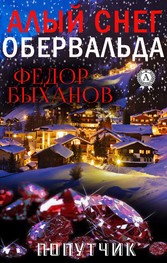 The geography of events occurring in the cycle of adventure works by Fyodor Bykhanov is broad and diverse, under the common name 'Fellow traveler', which opened the novel 'The Flight of the Doomed', and continued the same in volume artistic texts 'Golden Cave' and 'Grin of an avalanche'. So in his final novel, which is called 'The Scarlet Snow of Oberwald', the author takes to new places those who survived in the three previous books. They follow the search for treasures of the crushed ruby ??mine to Tajikistan, Afghanistan and even Switzerland, where criminal authorities are going to divide the precious booty. For the time being, thieves in law do not know that their every step becomes known to one of the special services from the acting under the cover of agent Sergey Kaluga. It is his intervention that turns out to be decisive. First, in search of treasure in the Pamirs, and then the final decision, both the fate of the unique rubies, and their own destiny, held in the Alpine mountain hotel. This and other e-books of a member of the Russian Union of Writers from Altai Fyodor Bykhanov, can be read and downloaded in epub, fb2, pdf format. Including: collections of humor 'Fun mood', fantastic stories and stories 'Alien', science fiction novels 'The Mystery of a Mountain Lake', 'Sledak from Korobeiniki', 'Stronger Flames', fantastic dilogy 'Unfinished effect' from the novels 'Clocks from the past And The Runaways, adventure novels Flight of the Doomed, Golden Cave, Grin of the avalanche and Wind of Hope. As well as collections of court essays 'Without a statute of limitations' and 'Forwarder's Bag', included in the cycle of electronic books called 'Criminal Province'.