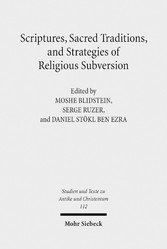 Scriptures, Sacred Traditions, and Strategies of Religious Subversion - Studies in Discourse with the Work of Guy G. Stroumsa

Scriptures, Sacred Traditions, and Strategies of Religious Subversion - Studies in Discourse with the Work of Guy G. Stroumsa

The articles in this volume discuss polemically charged re-evaluations of the religious traditions and scriptures of the Western world, employed throughout the centuries in various religious contexts. These studies consider new religious outlooks not as glosses on inherited traditions, but as acts of power exercised in the struggle for identity: contestation, appropriation, interpretation and polemics against the religious 'other', involving, sometimes covertly, critiques of inherited tradition. The volume outlines a typology of the variety of attested strategies, highlighting cases of borderline extremes involving subversions of mainstream forms of belief as well as elucidating more moderate avenues of interaction. Most of the studies were presented at a 2016 conference in Jerusalem honouring Guy G. Stroumsa, a renowned scholar of early Christianity and Late Antiquity, recipient of many scholarly awards, including the Leopold Lucas Prize 2018.