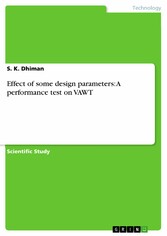 Effect of some design parameters: A performance test on VAWT

Effect of some design parameters: A performance test on VAWT


Scientific Study from the year 2018 in the subject Engineering - Mechanical Engineering, grade: 2, , language: English, abstract: Two different blade profiles were investigated for the performance of VAWT rotor. One is two scopped with different overlap ratios and the aspect ratios test under three different sir velocities and the other is the forward curved profiled blades with different inclinations with respect to shaft normal at the aspect ratios of 1 and 2. The present investigation helps in concluding that a two-scoop blades arrangement with H/D = 0,775 and e/d = 0,24 contributes the most favorable value of rotational speed of the rotor at which power coefficient and the torque coefficient can be maximized. While for the forward curved profiled blades the investigation realizes that higher power out of three blade system with curtaining from the combined effect of all the parameter i.e. N, ?, ?P and ?T provides the higher strength of the power output. Hence, the three-blade system with curtaining is considered as the best out of all the blades tested.