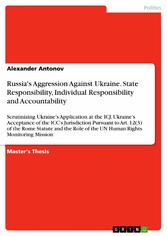 Russia's Aggression Against Ukraine. State Responsibility, Individual Responsibility and Accountability - Scrutinizing Ukraine's Application at the ICJ, Ukraine's Acceptance of the ICC's Jurisdiction Pursuant to Art. 12(3) of the Rome Statute and the

Russia's Aggression Against Ukraine. State Responsibility, Individual Responsibility and Accountability - Scrutinizing Ukraine's Application at the ICJ, Ukraine's Acceptance of the ICC's Jurisdiction Pursuant to Art. 12(3) of the Rome Statute and the


Master's Thesis from the year 2018 in the subject Politics - International Politics - Topic: Peace and Conflict Studies, Security, grade: 12, University of Southern Denmark, language: English, abstract: The majority of legal practitioners and liberal democratic states hold the same opinion: Russia's annexation of Crimea and its support to the rebels in Eastern Ukraine constituted an act of aggression against the sovereign state of Ukraine. Four years have passed since fighting erupted in Ukrainian regions adjacent to Russia leaving thousands of innocent civilians dead, traumatised or homeless. Families have been torn apart. Despite a vast amount of evidence, Russia has continued to deny the facts that it breached international law by annexing a foreign territory and supporting the so-called Donetsk People's Republic and Luhansk People's Republic after the ousting of the former pro-Russian president Viktor Yanukovych at the end of the Maidan revolution in February 2014. Most researchers expounded on the international norms Russia has put at stake and pondered over Russia's unreasonable legal justifications for its actions in Crimea. The Ukraine crisis has been dealt with extensively both from a political science and legal perspective but only a few scholars discussed the tools international law provide to establish Russia's responsibility for its wrongful conduct and to hold individuals responsible, suspected of having committed crimes against humanity and war crimes on Ukrainian territory. Scrutinizing Ukraine's recent application at the International Court of Justice on the basis of two treaties, the International Convention for the Suppression of the Financing of Terrorism and the International Convention on the Elimination of All Forms of Racial Discrimination, and analysing Ukraine's acceptance of the ICC jurisdiction pursuant to Art. 12(3) of the Rome Statute, this author aimed to identify the tools and barriers of international law in the context of establishing state and, respectively, individual responsibility. An analysis of the role of the UN Human Rights Monitoring Mission in Ukraine complemented the former two perspectives. Whereas the ICJ and the ICC can enforce international law and hold either states (ICJ) or individuals responsible (ICC), the HRMMU was examined for the purpose of creating accountability for grave violations of international human rights law and international humanitarian law.