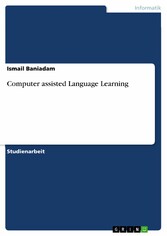 
Studienarbeit aus dem Jahr 2011 im Fachbereich Informatik - Sonstiges, , Sprache: Deutsch, Abstract: The use of technology in language learning and teaching programs is very essential. The present study was set out to investigate the effects of E-mail writing on improving EFL learners' written communication and autonomy. The participants of the study were 44 female and male sophomore students, by the age of 18-21 who were randomly assigned to the two groups of experimental and control. Each group consisted of 22 participants. The course lasted for 5 months, and was held in one of the universities in Urmia, Iran. The first group (experimental group) sent their assignments through emails in addition to the traditional class activities but the second group (control group) had the traditional class and assignments were handed in hard copies. For measuring the written communication, a pre-test and post-test was administered to both groups. The pre- and post-tests were criterion reference tests (recognition tests and productive writing activities), based on the materials covered in the class. The pre- and post-tests were parallel recognition tests and productive writing tasks. In order to measure the participants' level of autonomy, the Learner Autonomy Questionnaire, developed by Kashefian (2002), with 40 items in a five-point Likert scale was given to them. The obtained data was analyzed through the SPSS software. The results of this study will be useful for language teachers, learners, administrators and material developers.