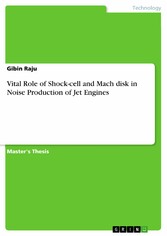 
Master's Thesis from the year 2018 in the subject Engineering - Aerospace Technology, grade: 3.64, University of Cincinnati, language: English, abstract: The aim of this thesis is to discuss the vital role of shock-cell and Mach disk in noise production of jet engines. This study focuses on calculation of shock-cell spacing and Mach disk from various configuration of C-D Nozzles using Shadowgraph technique and detailing on how it varies with the test conditions. In the past three decades, the air traffic has nearly increased by about 40% and have always called for alternative propulsion techniques to replace or support the current traditional propulsion methodology in order to travel longer distances in shorter frame of time. In the light of current demand, the thesis draws motivation from increase in noise levels due to technological advancements of meeting higher specific thrust thus, achieving higher efficiency. The thesis emphasizes on the study of shock-cell noise by developing a complete view of the shock-cell structure and associated parameters with an imperfectly expanded supersonic jet on CD Nozzles over range of under-expanded, design and over-expanded operating conditions. In the entire thesis study, the heated jets from the different C-D Nozzle are analyzed for proper visualization for the shock-cell structure. Shadowgraph is used in current study as it offers very high flexibility and acts as an excellent technique for visualizing the shock diamond exhaust structure and turbulent eddies. A systematic analysis has been performed to quantify the shadowgraph data through semantic video analysis and measured the shock-cell spacing over different temperature ratios (TR) and nozzle pressure ratios (NPR). Circular, rectangular and method of characteristics (MOC) convergent-divergent nozzles of 1.5 design Mach number with and without plates were tested to interpret the results. The data recorded during the experiment was processed to obtain an averaged image. Further, the averaged images were utilized to compute the shock-cell spacing of each nozzle. The computed shock-cell spacing is compared over the theoretical shock-cell length using empirical formula to validate the results. A good match has been established between theoretical and experimental results for the tested nozzles expect for over-expanded operating conditions.