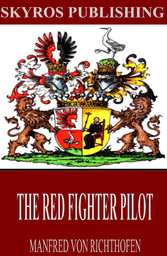 Skyros Publishing is dedicated to reproducing the finest books ever written and letting readers of all ages experience a classic for the first time or revisit a past favorite.
Manfred von Richthofen, also known as the Red Baron, was a German fighter pilot in World War I.Manfred was the most successful fighter pilot of the war and he remains the most popular fighter pilot in history.The Red Fighter Pilot is von Richthofen's autobiography which was published in 1917, a year before his death.