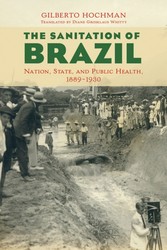 Celebrated as a major work since its original publication, The Sanitation of Brazil traces how rural health and sanitation policies influenced the formation of Brazil's national public health system. Gilberto Hochman's pioneering study examines the ideological, social and political forces that approached questions of health and government action. The era from 1910 to 1930 offered unique opportunities for public health reform, and Hochman examines its successes and failures. He looks at how health became a state concern, tying the emergence of public health policies to a nationalistic movement and to a convergence of the elites' social consciousness with their political and material interests. Politicians weighed the costs and benefits of state-run public health versus the burdens imposed by disease. Physicians and intellectuals, meanwhile, swayed them with warnings that endemic disease and official neglect might affect everyone--rich and poor, rural and urban, interior and coastal--if left unchecked. The book shows how disease and health were and are associated with nation-state building in Brazil.