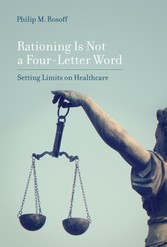 Rationing Is Not a Four-Letter Word - Setting Limits on Healthcare

Rationing Is Not a Four-Letter Word - Setting Limits on Healthcare

Most people would agree that the healthcare system in the United States is a mess. Healthcare accounts for a larger percentage of gross domestic product in the United States than in any other industrialized nation, but health outcomes do not reflect this enormous investment. In this book, Philip Rosoff offers a provocative proposal for providing quality healthcare to all Americans and controlling the out-of-control costs that threaten the economy. He argues that rationing -- often associated in the public's mind with such negatives as unplugging ventilators, death panels, and socialized medicine -- is not a dirty word. A comprehensive, centralized, and fair system of rationing is the best way to distribute the benefits of modern medicine equitably while achieving significant cost savings.Rosoff points out that certain forms of rationing already exist when resources are scarce and demand high: the organ transplant system, for example, and the distribution of drugs during a shortage. He argues that if we incorporate certain key features from these systems, healthcare rationing would be fair -- and acceptable politically. Rosoff considers such topics as fairness, decisions about which benefits should be subject to rationing, and whether to compensate those who are denied scarce resources. Finally, he offers a detailed discussion of what an effective and equitable healthcare rationing system would look like.