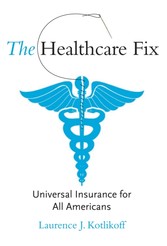 The shocking statistic is that forty-seven million Americans have no health insurance. When uninsured Americans go to the emergency room for treatment, however, they do receive care, and a bill. Many hospitals now require uninsured patients to put their treatment on a credit card which can saddle a low-income household with unpayably high balances that can lead to personal bankruptcy. Why don't these people just buy health insurance? Because the cost of coverage that doesn't come through an employer is more than many low- and middle-income households make in a year. Meanwhile, rising healthcare costs for employees are driving many businesses under. As for government-supplied health care, ever higher costs and added benefits (for example, Part D, Medicare's new prescription drug coverage) make both Medicare and Medicaid impossible to sustain fiscally, benefits grow faster than the national per-capita income. It's obvious the system is broken. What can we do?In The Healthcare Fix, economist Laurence Kotlikoff proposes a simple, straightforward approach to the problem that would create one system that works for everyone and secure America's fiscal and economic future. Kotlikoff's proposed Medical Security System is not the &quote,socialized medicine&quote, so feared by Republicans and libertarians, it's a plan for universal health insurance. Because everyone would be insured, it's also a plan for universal healthcare. Participants -- including all who are currently uninsured, all Medicaid and Medicare recipients, and all with private or employer-supplied insurance -- would receive annual vouchers for health insurance, the amount of which would be based on their current medical condition. Insurance companies would willingly accept people with health problems because their vouchers would be higher. And the government could control costs by establishing the values of the vouchers so that benefit growth no longer outstrips growth of the nation's per capita income. It's a &quote,single-payer&quote, plan, but a single payer for insurance. The American healthcare industry would remain competitive, innovative, strong, and private.Kotlikoff's plan is strong medicine for America's healthcare crisis, but brilliant in its simplicity. Its provisions can fit on a postcard and Kotlikoff provides one, ready to be copied and mailed to your representative in Congress.