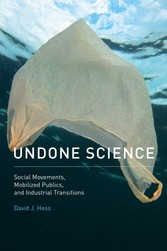 As the fields of social movement studies (SMS) and science and technology studies (STS) have diversified in topical focus, they have moved closer to each other. SMS has turned toward the study of nonstate targets and institutionalized repertoires of action, just as STS has turned to expertise and publics. In Undone Science, David Hess argues that a theoretical integration of core concepts in the two fields is now possible, and he presents just such a synthesis. Hess focuses on industrial transition movements -- mobilized counterpublics of activists, advocates, entrepreneurs, and other agents of change -- and examines several areas of common ground between the two fields relevant to these movements. His account reveals the problem of 'undone science' -- areas of research potentially valuable to the goals of industrial transition movements that have been systematically ignored. Each chapter begins with a problem in SMS, discusses the relevant STS literature, describes new concepts and findings that have emerged, and offers applications to examples that range from nanotechnology and climate science denialism to conflicts based on race, class, and gender. Topics include the epistemic dimension of the political opportunity structure, networks of counterpublic knowledge, and regime resistance in industrial transition.