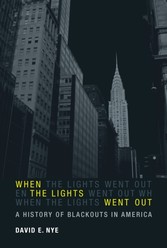 When the Lights Went Out - A History of Blackouts in America

When the Lights Went Out - A History of Blackouts in America

Where were you when the lights went out? At home during a thunderstorm? During the Great Northeastern Blackout of 1965? In California when rolling blackouts hit in 2000? In 2003, when a cascading power failure left fifty million people without electricity? We often remember vividly our time in the dark. In When the Lights Went Out, David Nye views power outages in America from 1935 to the present not simply as technical failures but variously as military tactic, social disruption, crisis in the networked city, outcome of political and economic decisions, sudden encounter with sublimity, and memories enshrined in photographs. Our electrically lit-up life is so natural to us that when the lights go off, the darkness seems abnormal. Nye looks at America's development of its electrical grid, which made large-scale power failures possible and a series of blackouts from military blackouts to the 'greenout' (exemplified by the new tradition of 'Earth Hour'), a voluntary reduction organized by environmental organizations. Blackouts, writes Nye, are breaks in the flow of social time that reveal much about the trajectory of American history. Each time one occurs, Americans confront their essential condition -- not as isolated individuals, but as a community that increasingly binds itself together with electrical wires and signals.