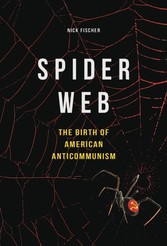 The McCarthy-era witch hunts marked the culmination of an anticommunist crusade launched after the First World War. With Bolshevism triumphant in Russia and public discontent shaking the United States, conservatives at every level of government and business created a network dedicated to sweeping away the &quote,spider web&quote, of radicalism they saw threatening the nation. In this groundbreaking study, Nick Fischer shines a light on right-wing activities during the interwar period. Conservatives, eager to dispel communism's appeal to the working class, railed against a supposed Soviet-directed conspiracy composed of socialists, trade unions, peace and civil liberties groups, feminists, liberals, aliens, and Jews. Their rhetoric and power made for devastating weapons in their systematic war for control of the country against progressive causes. But, as Fischer shows, the term spider web far more accurately described the anticommunist movement than it did the makeup and operations of international communism. Fischer details how anticommunist myths and propaganda influenced mainstream politics in America, and how its ongoing efforts paved the way for the McCarthyite Fifties--and augured the conservative backlash that would one day transform American politics.