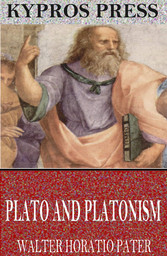 CHAPTER 2: PLATO AND THE DOCTRINE OF REST

OVER against that world of flux,

Where nothing is, but all things seem,

it is the vocation of Plato to set up a standard of unchangeable reality, which in its highest theoretic development becomes the world of “eternal and immutable ideas,” indefectible outlines of thought, yet also the veritable things of experience: the perfect Justice, for instance, which if even the gods mistake it for perfect Injustice is not moved out of its place; the Beauty which is the same, yesterday, to-day and for ever. In such ideas or ideals, “eternal” as participating in the essential character of the facts they represent to us, we come in contact, as he supposes, with the insoluble, immovable granite beneath and amid the wasting torrent of mere phenomena. And in thus ruling the deliberate aim of his philosophy to be a survey of things sub specie eternitatis, the reception of a kind of absolute and independent knowledge (independent, that is, of time and position, the accidents and peculiar point of view of the receiver) Plato is consciously under the influence of another great master of the Pre- Socratic thought, Parmenides, the centre of the School of Elea.

About half a century before the birth of Plato, Socrates being then in all the impressibility of early manhood, Parmenides, according to the witness of Plato himself—Parmenides at the age of sixty-five—had visited Athens at the great festival of the Panathenaea, in company with Zeno the Eleatic, a characteristic specimen of Greek cleverness, of the acute understanding, personally very attractive. Though forty years old, the reputation this Zeno now enjoyed seems to have been very much the achievement of his youth, and came of a mastery of the sort of paradox youth always delights in. It may be said that no one has ever really answered him; the difficulties with which he played so nicely being really connected with those “antinomies,” or contradictions, or inconsistencies, of our thoughts, which more than two thousand years afterwards Kant noted as actually inherent in the mind itself—a certain constitutional weakness or limitation there, in dealing by way of cold-blooded reflexion with the direct presentations of its experience. The “Eleatic Palamedes,” Plato calls him, “whose dialectic art causes one and the same thing to appear both like and unlike, one and many, at rest and in motion.” Ah! you hear already the sort of words that seem sometimes so barren and unprofitable even in Plato.

It is from extant fragments of a work of his, not a poem, but, appropriately, To Syngramma,+ The Prose, of Zeno, that such knowledge as we have of his doctrine, independently of the Parmenides of Plato, is derived. The active principle of that doctrine then lies in the acuteness with which he unfolds the contradictions which make against the very conceivability of the fundamental phenomena of sense, in so far as those phenomena are supposed to be really existent independently of ourselves. The truth of experience, of a sensible experience, he seems to protest:—Why! sensible experience as such is logically inconceivable. He proved it, or thought, or professed to think, he proved it, in the phenomenon which covers all the most vivid, the seemingly irresistible facts, of such experience. Motion was indeed, as the Heracliteans said, everywhere: was the most incisive of all facts in the realm of supposed sensible fact. Think of the prow of the trireme cleaving the water. For a moment Zeno himself might have seemed but a follower of Heraclitus. He goes beyond him. All is motion: he admits.—Yes: only, motion is (I can show it!) a nonsensical term. Follow it, or rather stay by it, and it transforms itself, agreeably enough for the curious observer, into rest. Motion must be motion in space, of course; from point to point in it,—and again, more closely, from point to point within such interval; and so on, infinitely; ‘tis rest there: perpetual motion is perpetual rest:—the hurricane, the falling tower, the deadly arrow from the bow at whose coming you shake there so wretchedly, Zeno’s own rapid word-fence—all alike at rest, to the restful eye of the pure reason! The tortoise, the creature that moves most slowly, cannot be overtaken by Achilles, the swiftest of us all; or at least you can give no rational explanation how it comes to be overtaken. Zeno had an armoury of such enigmas. Can a bushel of corn falling make a noise if a single grain makes none? Again, that motion should cease, we find inconceivable: but can you conceive how it should so much as begin? at what point precisely, in the moving body? Ubiquitous, tyrannous, irresistible, as it may seem, motion, with the whole so dazzling world it covers, is— nothing!

Himself so striking an instance of mobile humour in his exposure of the unreality of all movement, Zeno might be taken so far only for a master, or a slave, of paradox; such paradox indeed as is from the very first inherent in every philosophy which (like that of Plato himself, accepting even Zeno as one of its institutors) opposes the seen to the unseen as falsehood to truth. It was the beginning of scholasticism; and the philosophic mind will perhaps never be quite in health, quite sane or natural, again. The objective, unconscious, pleasantly sensuous mind of the Greek, becoming a man, as he thinks, and putting away childish thoughts, is come with Zeno one step towards Aristotle, towards Aquinas, or shall we say into the rude scholasticism of the pedantic Middle Age? And we must have our regrets. There is always something lost in growing up.

The wholesome scepticism of Hume or Mill for instance, the scepticism of the modern world, beset now with insane speculative figments, has been an appeal from the preconceptions of the understanding to the authority of the senses. With the Greeks, whose metaphysic business was then still all to do, the sceptical action of the mind lay rather in the direction of an appeal from the affirmations of sense to the authority of newly-awakened reason. Just then all those real and verbal difficulties which haunt perversely the human mind always, all those unprofitable queries which hang about the notions of matter and time and space, their divisibility and the like, seemed to be stirring together, under the utterance of this brilliant, phenomenally clever, perhaps insolent, young man, his master’s favourite. To the work of that grave master, nevertheless—of Parmenides—a very different person certainly from his rattling disciple, Zeno’s seemingly so fantastic doctrine was sincerely in service. By its destructive criticism, its dissipation of the very conceivability of the central and most incisive of sensible phenomena, it was a real support to Parmenides in his assertion of the nullity of all that is but phenomenal, leaving open and unoccupied space (emptiness, we might say) to that which really is. That which is, so purely, or absolutely, that it is nothing at all to our mixed powers of apprehension:—Parmenides and the Eleatic School were much occupied with the determination of the thoughts, or of the mere phrases and words, that belong to that.

Motion discredited, motion gone, all was gone that belonged to an outward and concrete experience, thus securing exclusive validity to the sort of knowledge, if knowledge it is to be called, which corresponds to the “Pure Being,” that after all is only definable as “Pure Nothing,” that colourless, formless, impalpable existence (ousia achrômatos, aschęmatistos, anaphęs)+ to use the words of Plato, for whom Parmenides became a sort of inspired voice. Note at times, in reading him, in the closing pages of the fifth book of The Republic for instance, the strange accumulation of terms derivative from the abstract verb “To be.” As some more modern metaphysicians have done, even Plato seems to pack such terms together almost by rote. Certainly something of paradox may always be felt even in his exposition of “Being,” or perhaps a kind of paralysis of speech—aphasia.+

Parmenides himself had borrowed the thought from another, though he made it his own. Plato, in The Republic, as a critic of Homer, by way of fitting Homer the better for the use of the schoolboys of the ideal city, is ready to sacrifice much of that graceful polytheism in which the Greeks anticipated the dulia of saints and angels in the catholic church. He does this to the advantage of a very abstract, and as it may seem disinterested, certainly an uninteresting, notion of deity, which is in truth:—well! one of the dry sticks of mere “natural theology,” as it is called. In this he was but following the first, the original, founder of the Eleatic School, Xenophanes, who in a somewhat scornful spirit had urged on men’s attention that, in their prayers and sacrifices to the gods, in all their various thoughts and statements, graceful or hideous, about them, they had only all along with much fallacy been making gods after their own likeness, as horse or dog too, if perchance it cast a glance towards heaven, would after the same manner project thither the likeness of horse or dog: that to think of deity you must think of it as neither here nor there, then nor now; you must away with all limitations of time and space and matter, nay, with the very conditions, the limitation, of thought itself; apparently not observing that to think of it in this way was in reality not to think of it at all:—That in short Being so pure as this is pure Nothing.