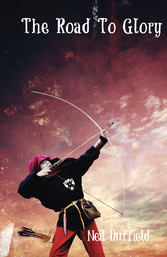 The Road to Glory

The Road to Glory

A group of young villagers, some of them teenagers are persuaded to enlist in King Henry's army. They set sail from Southampton to claim the throne of France for England. Each has a different reason for going to war and their expectations vary, but none has any experience of fighting in a real battle.

Combining fact and fantasy, the play takes us on a journey from the peace of rural England to the bloody battlefields of Agincourt in France, where the young villagers finally come face to face with the mightiest army in Europe. The reality is both shocking and brutal.

What happens changes their lives forever.

Ideal play for schools,colleges and youth theatres which questions the need for war and its consequences.

'... an extraordinarily moving and effective play, so dramatic that, at times, it is almost assaulting.' The Guardian

'... this blazingly adventurous show.' The Scotsman

'... no doubting the show's mesmerising appeal to the imagination, which seized the audience with rapt delight.' Daily Telegraph

'... there is not a moment which isn't magical.' Yorkshire Post

'... a marvellous play, a complex dramatic story, challenging in both form and content' Times Educational Supplement

Neil Duffield has written more than 50 plays which have been produced extensively throughout Britain and abroad. His play The Lost Warrior, commissioned by the Dukes Lancaster, won the 2006 Arts Council of England Award for work which displays excellence, inspiration and innovation in children's theatre.

Neil is married to freelance theatre director Eileen Murphy and lives in Bolton.