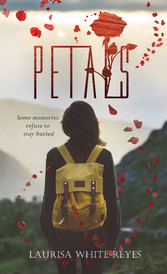 On Christmas Eve, a horrific car accident leaves Carly Perez without a mom. After a year of surgeries and counseling, Carly's life is nearly back to normal-except for the monsters-vague, twisted images from the accident that plague her dreams. When her father insists on spending their first Christmas alone in Guatemala with a slew of relatives Carly has never met, she is far from thrilled, but she reluctantly boards the plane anyway.
That's where she first spots the man with the scarred face. She could swear she has seen him before. But when? Where?
In Reu, the Guatemalan town where her father grew up, Carly meets Miguel, her attractive step-cousin, and thinks maybe vacation won't be a total waste after all. Though she is drawn to him, Carly's past holds her back-memories that refuse to be forgotten, and a secret about the accident that remains buried in her subconscious. And everywhere she turns, the man with the scarred face is there, driving that unwelcome secret to the surface.